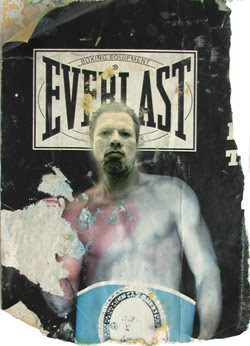 So Friday see He had me on the ropes, hitting hard, waves of regret rolling in and over like a close friend. Working the body, a house of pain my lot. Endless the list of tasks, the places to be, the calls to make and receive, the devil to pay. Decisions past and way past due, a standing eight count, bruised and weak at the knees. In He moved to lay me down for the count.

But along came my second wind, and I started to punch back. Mischief and adventure running in the cold clean night air, spinning me around and around, with furtive glances lit by red hot coals. Suddenly I was back, joy like a wave, feeling each breath. Now I had Him back in the corner, on the defensive and knew I could go another round.

I bloodied His lip with the last flurry...a few more days like today, and I may begin to dream of going the distance and even hope for a split decision. I know He'll be back (He always is) with punches I can feel to the bone, but guess what, I'm ready now... (bell ringing)
Posted by Randall Garrett at 1:00 PM No comments: 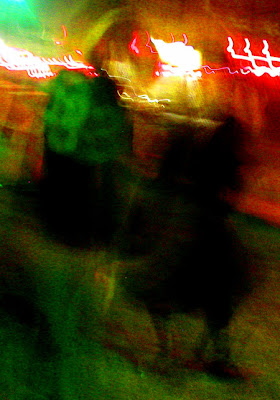 So there we were at the Kettle, bottle full o' beer, and...standing on the sidewalk I turn and literally walk right into my ex-wife and her boyfriend (nice joke there, karma). We exchange pleasantries and then someone says "where to now"? So we (we being Mary, Vanessa, Polly, Shelby, Gabriel and I) end up at the Metro Diner, and what happens? Everyone orders biscuits, I mean everyone.

We're trying to decide where to go next (it seems like the party's always around the next corner, nomad-like), and Mary says "hey Vanessa's gotta hotel room". That doesn't go over well, and for reasons I don't wanna go into at the moment, we end up at a party hosted by Mr. Child Actor himself. So Polly saves me from walking into the wrong house at 1:00 in the morning, and safely inside Mr. Child Actor's house, we settle into a cabana in the backyard.

Next thing we know, a drunk Persian salesman saunters up with an impromptu lecture which goes by the title of "I can sell anything to anyone", which must be true because he promptly sold me to Polly for everything she had in the bank at that moment: $298.47.

Finally, and mercifully, Persian salesman's brother takes him home, and we follow out into the streets shortly thereafter. Dallas Texas, thanks for finally showing me a good time.
Posted by Randall Garrett at 11:50 AM No comments: