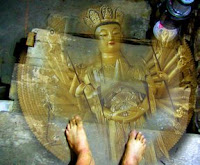 he's a big baby, see him cry,
suck on her 'til the day he die.
he got wings, but cannot fly,
mother of mercies, hear his cries.

she got needs no man can see,
tired of being on her knees.
needs some refuge and some peace,
mother of mercies, please...

temple not made by hands

for days, for weeks on end, he was listless and numb to the turn of events which he had set into motion. again fear had compelled him as it had so many times before to tear down the temple they had built haltingly and with such trepidation, and yet still it glistened in the fading sun, stones toppled and shining like nuggets of gold scattered in the dust.

at night, camped out among the ruins, glancing through the torn pages of the holy books he searched in vain for some wisdom, something to explain the emptiness he felt inside. when the faltering light of the generator finally sputtered to silence, there in the dark he lay still, the sweat pooling on his skin.

the wind blew as he felt her slip by him in the dark. his breath grew shallow and he sank deep inside, feeling the ravaged heart beating. down he went, down the torrent rushing out and through the arteries and veins, spreading as a wave breaks on the surface of land and coursing through him in a pulsing flood.

finally, when the generator ran out of fuel, he began to place candles among the fallen stones. on his knees he leaned into a heavy rock, and began to push it back into place, then another, and another. in the flickering light her shadow seemed to jump out at him, and then fade like an illusion.

late in the night, it began to rain, a cold relentless downpour, extinguishing what was left of the candle light. his tears mixed with the wetness, as he pushed through the mud, adding stone upon stone.

it was there the realization came over him, empty and alone sinking into the sorrows of new and uncharted depths. he was powerless to halt the worship that had opened in his heart now one year hence. he could tear down the temple once, twice, a hundred times, and scatter the stones to the farthest ends of the earth, yet she would never depart from that place inside him.

that moment he bowed down into the mud, and with great care lifted the next gleaming stone up out of the mire, setting it into place there upon the rock. briefly he paused, and then down again, he disappeared into the void.
Posted by Randall Garrett at 10:41 PM 1 comment: