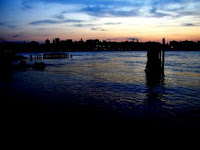 we'd been working for days, getting ready for the opening, when dan calls me up: "ran, you and your friend gotta come to this party tonite. it's over by the east river in long island city. it's crawling with writers and such." bobbie and i, inhaling the fumes of early august manhattan weren't in a hurry to go anywhere, except back to williamsburg and the (relatively) cool air of the second floor window box fan.

the jammed in press of days old funk mixed with fresh scrubbed and body washed skin as we hopped the "L" for the long ride under the river and out to bedford street. a screech of brakes and we were spat onto the platform, the mix giving way to straight up dank, late summer subway odor. out we came into the fresh air, and my phone beeped with new voice mail as the signal came back. dialing in, it was dan again: "hey ran, hire a car and get on over here, you don't wanna miss this party." i hang up by the time we begin the walk up the long flight of stairs to dan's raw warehouse.

a dark figure looms in front of the box fan, devon, forty-year old skater boy queen, broken down addicted to whatever, picking at something on his shirt. he was immersed in conversation with himself, a steady stream of unintelligible sound trailing our way. "what's happening tonite ?", i offer up. "sonic youth and yeah yeah yeahs playin' over at the pool, free barbeque at manhole tomorrow, house party in dumbo later on," trailing off into a free-form mumble.

bobbie chimed in, "hey, you know where i could score some weed?" devon, still fixated on his shirt, finally looked up, his fake shoe polish black eyes shiny and mismatched. he says, "lemme find my cell phone, i gotta contact in there." disappearing into his closet of a room, he emerges with this beat-to-hell phone with only three working keys. "there's a number for my weed man in there," he says, handing the phone over to bobbie. sensing the hopelessness of the proposition, bobbie just looks at the pile of electronic crap in his hand and shrugs.

just then, my phone rings again...it's dan: "hey ran, you GOTTA come to this party, they gotta boat and barbeque. it's at mark disuvero's studio." suddenly it hits me, this was a REAL party. "alright, we're there," click.

bobbie, stretched out and sweating on the futon. "dude get up, this is the big shit deal tonite, i'm callin' a car." minutes later, we're bailing out into the darkness of an expansive scrap-yard looking street. a corrugated steel gate slowly swung open, revealing two huge airplane hangar studios on a hundred yard long stretch of dock. "what took you so long?", dan quipped.

we did the walk through, checking out these immense god-like steel sculptures, finely balanced articulation sent rotating around the hangar with the flick of a wrist. out on the loading dock we stepped, hipster group hanging out at tables, drinking, talking, eating barbeque. i did the meet and greet, trying to hold a conversation, but the river called insistently, just off the concrete dock.

breaking away, i jumped down to a floating platform and began stripping off my clothes. city lights reflect across the blackness of the river as i dove into the cold darkness. invigorated, i opened my eyes and tasted the fresh salt-tinged liquid deep underwater. black depths glowing with a neon pulse as i propelled myself up and into the air. i took a deep breath, realizing i was twenty yards offshore.

the others looked small and insignificant, as a wave of fear and isolation ran over me. taking another breath, i dove back under, gliding through the peaceful chill and blind miasma. this time i came up near the platform and awkwardly clambered back onto dry land. shivering, i began to put my clothes back on.

"is he really naked?", a filipino girl asked bobbie, as though she had never seen a human body before. bobbie nodded and then dan called out into the night: "hey ran, that was real huck fin of you, there." pulling my shirt on, i smiled and glanced back into the night.
Posted by Randall Garrett at 10:19 AM No comments: