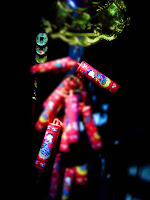 When darkness beckons, dive in to it.

The only loss is to avoid what you are feeling.

They all are parts of you in search of liberation, anyhow.

Nothing to fear, no need to numb the sensations, just down.

Now, feeling all the way, down deep, into the black.

Posted by Randall Garrett at 7:59 PM No comments:

...to look through my own eyes, as though through every set of eyes that has ever been. (vaishnava expansion)

embrace your mental projections, the gods, the devils; embody all the forms, rich man, poor man, beggar man, thief. play, explore, dive in, on and to and through them all to that infinite expanse, the unmanifest, upon which we act, always.

i don't generally believe in prophetic language, but I do believe we create self-fulfilling prophecies. having said that, I wish the apocalyptic crowd a happy end of the world, and join in with the consciousness raising bunch in hopes for an uptick on the One Love spectrum. 2012, let's dive into it. yeah, it had been a tough year for Kenny, but he was damn sure gonna make sure it ended with a bang. one week to wring holy hell outta this teardrop universe, before the bottom dropped out o' things, and they realized he was the one left holding the bag. pool halls, beer joints, dolls and thrills, they all waited for him, just around the corner to eternity.


humming on these, the shortest days of the year, "here comes the sun, little darlin' and I say, it's alright", while trying to steer clear of the frenetic, consumer orgiastic moment.


three nights ago, an owl flew across the road in front of me. this morning it was a hawk, swooping down to grab it's prey, oblivious to the downtown traffic. so what sooth do you say, my feathered friends?


the anger, the frustrations...wait, let go, watch them floating, momentary panic, unfulfilled desires...slowing now, emptiness...injustices and self-inflicted pain, slowly, back to the moment...there, expansive space without limit, overwhelming gratitude, you can't get it wrong, you have as long as you need to work it out, peace.


night falls and traffic rushin' / electrons and booties bumpin'
all along the city streets / neon lights the night to keep.


last night a small snake glistened on the wet sidewalk below me. i watched as it coiled and uncoiled in fluid motion, and considered how it functions as an emblem of wisdom, or conversely evil and corruption, in various spiritual traditions. to me it looked like beauty personified: power, direction, elegance, grace.


as I walk to work downtown, along this section of sidewalk I like to pretend that I am walking along the edge of a building, and how it might feel different if I weren't afraid.


and so we find it, in the shadowy, winding alleyways: the heart festooned, a garland both beating and bleeding. if it is that we can look with eyes of compassion, a pathway opens, however slim, into the third noble truth.


liberation comes, not by blinding epiphany, but through a thousand million moments, trench warfare liberating one chakra at a time. here it is the Svadisthana that finds expression, the gut, center of feeling and connection. beauty resides there, flawed and vulnerable in the darkness, shining all the more in its proximity.


Middle-aged guy, looks like Napoleon Dynamite walks up to my office door, looks at the placard, and says "I'm Randall, I buy books". I thought he was a student, come to mock me. Then I saw the earnest look on his face, and the stack of books in his arms, and realized he was speaking the truth.


look inside, look outward, it is the same infinite universe in all directions. even now, we are just touching the surface.


outside rain falls steadily, for many hours now, inside wood floors are mopped, thoughts ebb and flow in the stillness, Johnny Cash on the radio.


watching the eight worldly conditions flip like coins through the air.


Purusha and Prakriti sittin' in a tree...


if you want to feel the gravitation to and away from those nearest you, ask yourself which ones among them teach you to love, and you will know the answer.


Here's the last question and answer from a recent e-mail interview:

-If you could curate your dream exhibition, what would it consist of?

Let's see. A table or bench made by young Jesus the carpenter. A street art installation made by some kid who hangs out in Garibaldi Plaza in Mexico City. The carnival carousel that looks like a giant Chinese paper lantern. The most awesome school diorama ever which blends fact and science fiction. With a performance by an aging punk band that has traded in its amps for strange, handmade acoustic instruments and ambient sound.


Note to my egoic self: i have to chuckle at the lengths you go to draw me in, but i don't play the game anymore. i recognize your illusion and...this mental space is liberated. :)


looking back with eyes of compassion and experience, at all the effort, at all the desire, at all the mistakes, i know i'd smile at my foolishness, and do it all again.


Walkin' down Continental Ave, headed to the gallery, mindin' my own business..."Hey, know who you look like? You look like that...m-th-rf-kn' rock-n-roll singer from back in the day. What's his name?"

cast away your cares, poor Rodin, their weight is nothing but the illusion you so carefully tend to.


tonight, the bright and morning star, it leads the moon across the night sky...teach me.

this is my path to liberation: to recognize when conditioning arises, to feel it's ebb and flow in my body, and not respond to it's pull.

Student at campus art reception says, "art is like the Blob, it's always moving". Not quite sure I got it, but I like the analogy nonetheless.

Posted by Randall Garrett at 11:22 AM No comments: