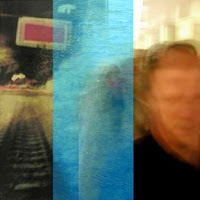 ((wave ride)) he floated out with the surf, the waves swirling and picking up, lifting him around some rocks and out into the deep, surging water. out further, bobbing and weaving past five or six celebrities, their tanned skin and sunglasses glinting.

suddenly a wave caught him and with a swoosh carried him in, the surf piping into a channel, a fast-running amusement park water ride. gliding in with the others, he rode the waves, the water cold and clean, in under a building now the surf broke on a transitional beach.

he came up out of the water, stepping onto the sand and walked to the side, where he stepped onto an escalator to ride up and back out to the water. two girls, one in front and one behind shadowed him. as they went up the escalator, the one behind pushed her finger through his swimsuit and stuck it into his ass.

he turned to look at her and...

((night running)) it was night and he was running, running to get away from the authorities. out across a field, a baseball field, breathing heavily he crossed. neon blue laser light beams criss-crossed the field from every direction, moving at random and chaotic intervals. ducking and twisting now as he ran, trying to keep from being cut to pieces by the lasers.

as he moved beyond their range, now into the darkened outfield, the ground became rough and uneven as he ran. each footstep now gave way to a sickening crunch. he looked down and saw the skulls of dogs crackling under each footfall. revolted, he turned his gaze out across the field, and saw an endless stretch of skulls, many thousands of them across the ground all the way to the outfield fence.

((catching train)) he was on foot, walking through the old-west theme park, trying to find a way through. men in period costumes, round-glasses, and curly moustaches passed by arm in arm with saloon girls. wooden signs with directions painted on hands, extended fingers pointing in various ways only confused him.

he went down a dusty hall and found his way out through a side door. now he was in a large, empty parking lot, trying to get to the local mall across the way. a chain link fence encircled the lot, but he saw a truck going out through a steel gate. he ran and squeezed through just as it closed. down a drainage ravine and back up the other side he passed and was about to cross some railroad tracks to reach the road when a train approached.

as it passed, he saw men sitting on top and hanging from the sides of the dirty freight train. british soldiers and indian peasants in white fabrics, all of them covered in dust. he grabbed onto the handrail of a car and swung up on top of a coal car, and watched as they passed back from where he came, the mall receding into the distance.

((border tunnel)) they were in a construction tunnel, the sides boarded with plywood. it constricted and funneled them to a makeshift entrance, where a guard stopped and questioned them.

passing through, he came out into bright sunlight and the fresh cold air of early spring. green fields stretched out to his right. he turned the other way and walked up a short gravelled hill, then onto a winding, hilly street with large two- and three-story boarding houses that had been mansions for the wealthy a century ago.

(only a month later, he passed on this street in old el paso, only a block from, and looking down on the u.s. mexico border fence and crossing)
Posted by Randall Garrett at 11:58 PM No comments: