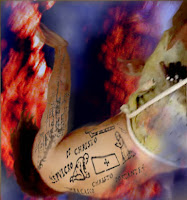 My recent practice has involved applying the methodology of the Tibetan Book of the Dead, in particular, that of passing through the Bardos of the wrathful deities. The logic being that if you apply this practice in life, you will make progress here, and be familar with it after dying.

Poetically enough the wrathful deities, like the three wise men, decided to visit me on Christmas Eve. A peaceful evening walking with throngs of Christmas revelers later gave way to a deep sense of anxiety and nightmares.

Toward the deep existential dread that came up, I was able to hold no grudge and remained fairly neutral, understanding it as karmic residue that I could accept as coming from within myself. This was a marked departure from the teaching I received early on that these feelings are evil, and need to be exorcised.

As the experience unfolded, I began to find compassion toward that young child I once was, and also toward those well-meaning, but ultimately ignorant teachers and preachers of my youth. I also found gratitude that my own children are progressing at a much younger age toward wisdom and realization than I was able to.

Through a Christmas night filled with unsettling dreams I ventured, not attaching myself to them, nor pushing them away, but trying just to be present and allow the energy to complete itself.

And so this is my current resolution, to experience the karmic residue of a million existences, and watch as it burns itself out, at its own pace. I couldn't escape the irony that this realization came on the symbolic night of another very celebrated painful birth into this world.

This seems to me like an honest path to liberation.

Posted by Randall Garrett at 1:34 PM No comments: