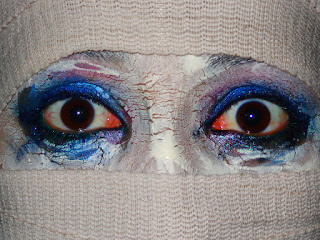 Referencing vintage horror film, Marcel Duchamp's Large Glass, and ritual incantation, the performance is a broken down ceremony examining the interplay between feminine and masculine energies as embodied in the archetypes of bride and groom. 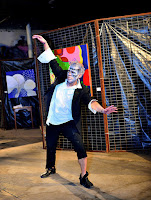 Vows are exchanged to the sound of bells, mantras, lightning crashing and dreamlike video projections. The newlywed couple explores the duality of matter by sacrificing their bodies to the alchemy and minefield of gender archetypes and cult classic caste roles.

Set amidst altars evoking domesticity: the kitchen, the bathroom, the bedroom, the couple play out scenes of longing, pursuit, violence and transformation.


Eyes of the Bride installation video (2014) 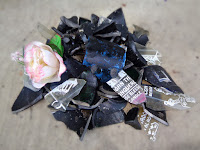 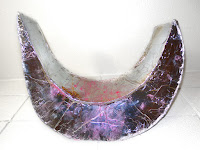 Apocalypse Poem (Om Vajrasattva Samaya)
The game is rigged, the dice is loaded,
An illusion all and so compelling,
Each moment an apocalypse in its own making,
And every insight into this truth a precious gem,

An opportunity to realize the infinite expansive
Qualities of our true emptiness nature,
So to generate compassion for suffering
And a playful engagement with samsara,

We are here to massage these forms, to lovingly
Engage the energies of creation and destruction
In their conjungal dance of birth, life and death,
Until their devotional service is no longer required
When what is beyond conception will be revealed
Through the wisdom of experience,
And the falling away of what is known.
As Allen told Neal, I have no idea who's running things
That's the whole point, well...
And Neal shrugging, sardonically saying "enjoy it".
This is why I dream of cities on fire,
Of massive storms, a deluge washing all away.
Burning clean, burning bright, leaving no trace,
Cleansing all this illusion, until only clarity remains.
Om Vajrasattva samaya, ha ha ha ha ho, Bhagavan,
Sarva siddhi me prayatsa, Sarva karma su tsame,
Tsittam shriyam kuru hum

Election update (Ferguson) same as it ever was (Monsanto) nothing to see here (Corrections Corporation of America) move along (1033 Program) bought and paid for (NSA) let freedom ring edition, not today but someday we can say a new day is dawning brothers and sisters, hallelujah. 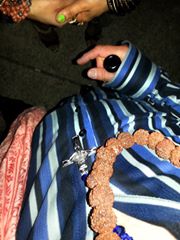 Deluge Refuge (Strays on the Street)

Night sets in hot and sweaty as the band goes on and people sway rhythmically in the blacklit warehouse. Channeling her best sacred woman style, she glances around, checks her phone and steps out on the street, just as the weather turns, wind picking up and heavy drops begin to fall. Catching his eye there on the sidewalk she says, "I need a change outta these platforms, let's go back to the car for my flip flops".

Walking close now down the broken sidewalk, she begins to fall and reaching out, he catches her and they huddle down as the skies open up, a torrent unleashed soaking them in waves of cold wetness. "Sacrifice!" she exclaims smiling, as they push into the driving rain, almost crawling now, soaked to the bone and stepping into and through the glistening fresh rainwater puddles. Shivering, he fumbles for his keys, and thinks about the stray dogs passing by earlier on the street, hoping they have a dry place to take refuge. Lightning crackles in the sky just above as he flings open the back door, and they dive in to escape the deluge.

"Krishna!" she laughs, and pulls off the soaked chadors as he leans forward from the backseat, across the console reaching down toward the front floorboard. "Where's that sweet playlist?", he muses, and finds the iPod, still on all fours, head down below the seat and ass sticking up toward her in back. Pushing play, a tender mantra kicks in: "Om Om Om, Sarwa Buddha Dakini Vajra Varani Vajra Virochana" he falls back next to her, and mesmerized they watch the sheets of rain pour down the windshield.

She pulls out her pipe and hands it to him, saying "I saved you the green" as he lights up, inhaling slowly pranayama style, holding it there in equilibrium. She takes a huge puff now and blowing the smoke out in a gray blue cloud, coughs as he chuckles inside. Reaching across her he pulls her faux fur coat on to warm up and leans over onto her shoulder, resting for a moment, then glances into her eyes as they move close and touch in a gentle kiss.

Fucked Up Your Sheets 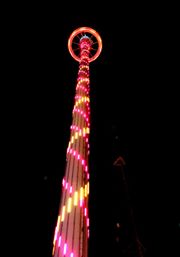 Maya on the Midway (Recognition Within the Dream)

Having begun their journey that evening with a visit to the mystical peacock, and observed the beauty of his integration of the many lineages of the bird kingdom into one magnificent and varied body, now they move on along the night path as it widens and people pass wide eyed and nearing the neon lighted entrance archway now where the lights and sounds grow exponentially more vivid. "There she is", he said. "What, baby?" "Maya", he offers up as they walk under the lighted arch spelled "MIDWAY".

"Hey look, Prince!", she exclaims, and they run over to revel at the side show mural as his image stares down at them in all his gender ambiguous glory. "He's the god of the midway", she cries, "let's bask in his effulgence", as they pause briefly to reverence his image there, then continue on.

And stopping before the enormous ferris wheel mandala he says, "Look baby, I told you I'd find the real dharma wheel, and here it is, just like I said... the Wheel of Right Turning."

And as he speaks, it begins to turn, but not clockwise in the direction of his own turning hand, but the opposite way. She says, "you know why that is, right baby?" "No, why?" "Because everything in Maya is a reflection, a mirror image of the true reality".

They walk on, exchanging glances, he moves first ahead, then behind her, to her right, and then left, mingling in and through the crowd, winding all around the midway.

Nearing the end now, as the lights began to fade, she says "What's that deity, the one that charms the other beings? Culu Cooley?"

"Cool cooley!", he replies, confused but intrigued at her question. "Cool cooley, cool cooley", it becomes his mantra. Then he realizes what she is saying. "Kurukula", he answers clearly, and their eyes lock in recognition.
Pausing beneath the orbiting tower, they watch as it rises slowly and majestically upward, a lighted neon Shiva column into the sky, and he says, "Dream travelers can leave a mark to take them back to their dreams, did you know that?"

Om Shanti Shanti Shanti. She was surrounded in a world of ice, bright, sharp daggers of cold, the mountain behind Lord Shiva rising to the heavens as she sat in his crown. Lightning crashed and the ice broke all around her, rivers of icy cold waters, a raging torrent now flowing out from the mouth of the Ganges. The electrical discharges thundered all around him as he awoke into the liminal space of Brahma Muhurta, glancing to see her silhouette in the darkness.

And keep you safe. Walking along the cracking ice, and following the emerging floodwaters heading downstream from Lord Shiva, she heard a sound coming from the bottom of an icy well. A powerful and subtle white snow lion followed her from a distance in protection. She crawled down into the well and found a young girl huddled there shivering from the cold.

Om Namah Shivaya. He walked with her past the gang of white dudes in muscle shirts as they stood next to their hot rods in the parking lot. They leered at her as they passed by, and he turned, placing himself between them and her, staring and said "this is my strong black woman, back the fuck off", as their gazes lowered away from his.

Om Namah Shivaya. She knelt down in the well, wrapping her arms around the girl, and covering her with holy texts to warm her, lifted the child up to stand and began to help her to climb out of the well. Lightning continued to crash moving outward and away from them now and across the wintry landscape.

Om Namah Shivaya. He stood with her on a subway platform, where the trench coat wearing beast had tried to take her into the underworld once before. A man with a pistol appeared quietly at the far end of the platform as Ricardo engaged him holding a knife at the man's chest. They chased across the platform, as he stood before her ready to fight, until they exited and all became quiet.

Thunder continued to roll in the darkness, but far away now, and a heavy rain poured down, washing the earth in torrents as they lay there and night turned into morning. She turned toward him as he continued to chant and his eyes grew heavy as he gently fell asleep in her arms.

Artists, writers, musicians, performers make your art, resist the prevailing winds of commodification and revel in the freedom of your expression. This is the surest form of protest, an open mic voice among the tidal wave of apathy and conformist culture.

Guy walks into a party. Hanging with friends, lounging languid on a sumptuous overstuffed bed. People mingling, painting their bodies in neon day-glo colors, externally transformed, but talking as though very much the same. Pulled in, he takes off his shirt and scarves, lets a friend paint him too, and feeling the spirit move, finds himself plunging into a brief shamanic journey, grabbing the hands of his other painted friends, and leading them on a wild run through the space.

They contort their bodies wildly, passing strangers in the hallway, themselves covered in paint, yet looking on wide eyed at such a breaking with decorum. Running, jumping, he and his friends scare the other party people into brief moments of recognition.

Now spent and the spell broken, he goes to retrieve his shirt and finds it missing. Looking all around, and wondering where could it be, or who might have taken it. Perturbed, looking across the room now, he sees a new acquaintance from earlier in the evening, wearing his missing shirt.

This was the same stranger turned friend that expressed fascination with the shirt at the start of the evening, who upon seeing the logo "MEXICO"  told him stories of trips through the jungle, of the darkness thereof, of the unseen animals that howled in the trees, of the indigenous peoples there who spoke a language more ancient than the everyday Español, of the drug wars and how he was afraid to go back now.

He wondered what to do... should he let it go, or take back what belonged to him.

Driving home later, and slipping into bed he felt the familiar shirt brushing against his skin, and pulling it off, was taken back to the party scene, of rubbing the dried paint, bloodlike, from the bare skin on the back of his new acquaintance, there and on into the dark jungles and innumerable unseen beings passing through them, of the give and take and trusts exchanged as they collided there in the night.
Posted by Randall Garrett at 9:37 PM No comments: