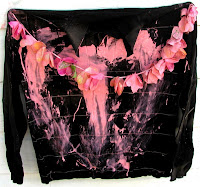 the monks, in sand colored habits, seated themselves in concentric rings rising up the inside of the beehive like structure. at the base and looking up at them, the elder abbot, neither male nor female with a head of shaved stubble, began speaking of the glories of dying in this way, and of how nirvana awaited directly on the other side for those who gave themselves willingly to it.

he, and a few of the others, knew that their only chance of surviving the gas was to sit near the top of the hive, where a couple of windows afforded an escape path if they could not hold their breath for long enough.

finding a place, he leaned forward with the others into a sitting fetal position. the last thing he saw before closing his eyes was the shaved heads of row upon row of young male devotees. then, the snakelike hiss of gas as all faded to blackness.

now, outside the temple, he rode up in a sedan with the other defectors. they stepped into the darkness and quickly stole up the hillside the stupa was built into. by a flickering firelight, he saw a middle-aged monk directing bhikkus in the disposal of the bodies.

walking into the aftermath, he pulled the cowl over his face to avoid the director's gaze. stepping into a room of scattered bodies, he felt an energetic scurrying and looked down to the floor. a multitude of creatures, ants, grasshoppers, crabs and the like, were devouring each other as they swarmed on the parched ground.

reaching down, he picked up a green grasshopper, intent on eating a tiny ant, even as it was being consumed by a much larger one. they began crawling on and biting his legs and hands. he brushed them away, but then became fascinated by the insistence of their actions, and held still as they continued to swarm...
Posted by Randall Garrett at 4:24 PM No comments: