bloom (in the ghetto) 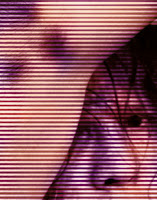 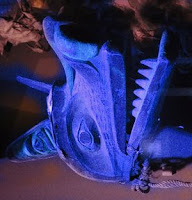 the pinata ascended haltingly up the backyard cable, a blue donkey rotating slowly in the air. blindfolded, vlad knelt below it like a knight before battle, his head bowed. the russian had already burnt his hand on the grill, and held the wooden pole with some difficulty.

as he sprang to action, i saw her coming toward me, carrying a bottle of chilled vodka. "we chase it with a pickled tomato", she said. "you hold it to your mouth and squeeze."

vlad had been flailing at the air for some time now, and the little donkey seemed to be smiling at him. its orbit becoming more and more eccentric as the pole sliced through the air, coming dangerously close to the laughter around him.

"be my designated driver", he said as she led him inside and up the stairs. the darkened room began to turn slowly as he lay beside her on the futon. pouring a shot over her, he licked the vodka off her stomach and squeezed the tomato chaser into his mouth. "you are what you eat," she said.

the party had moved indoors now, their voices rising from downstairs and breaking free of gravity. he was behind her now, their rhythm merging into the blackness. time sped up, and they fell spent onto the covers.

in the morning the russians were gone, the broken pinata stuffed in the trash can. he staggered into the kitchen and pulled a carton of orange juice from the fridge. tilting back his head to take a swig, he saw a mark on the ceiling, a sneaker print. closing his eyes, he saw vlad cartwheel into the night.
Posted by Randall Garrett at 10:04 AM 1 comment: 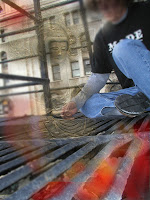 sitting on the fire escape he looked down, eight floors to the ground below. concrete, stone and steel, the city, tough and relentless. a lighted neon cross blared "jesus saves" from the street front mission, car horns shouting as traffic rushed up to the stoplight, people hurrying along the walk.

slowly he took a drag from the cigarillo, warmth and fire pulled into his lungs. he closed his eyes and felt the smoke inside balancing out the cool blasts of wind which buffeted him high up the city's side. he felt himself slipping into a dream, of soft grasses and flowing water under a canopy of trees.

she climbed through the window and sat beside him, her legs resting on the steel bars. "this is kind of nice" she said, and he opened his eyes, looking up at the softness of the sky and beyond. she poured sangria over ice in the plastic cups and handed him one. "to nice" he said, and tipped his cup into hers.
Posted by Randall Garrett at 10:19 PM No comments: