Somewhere I have 350 pesos left over from my last trip to Mexico City, but all I can find is 6 peso coins. Tomorrow, I need to get from the airport to the Zocalo via the Metro. Tengo 6 pesos. it. just. might. work.

Flying in, volcanic ash fills the sky for miles around. Descending now, the sky clears and there she lies: endless structures surrounded by mountains, in a bowl of green foliage. And we touch down in clear light of morning. 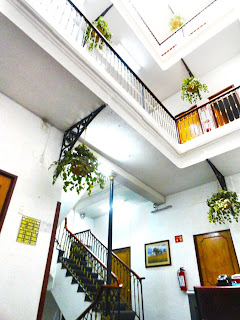 A day that started at 3:30 am in Dallas ends 20 hours later and a thousand miles away, and I've officially walked and backpacked myself to exhaustion in the time between. What dreams will you show me tonight, Mexico? 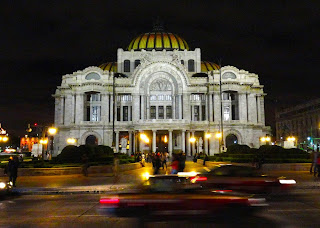 View of the Palacio de Bellas Artes at night, on the corner of Eje Central and Avenida Juarez. It marks the transition from the chaos and grime of the Centro Historico into the culture and refinement of Alameda Park. The sleaze of Plaza Garibaldi and Langunilla market, though only a few blocks to the north, seem worlds away. Artist types lounge and chat out front, jazz and rock bands play for coins across the street, and lovers make out on the marble steps. 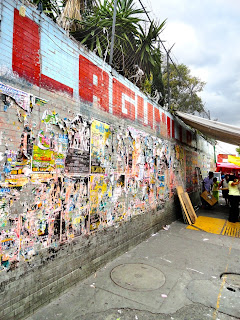 Side street in Lagunilla, massive and chaotic indoor/outdoor market on the north end of the Centro Historico. Tepito, the "thieves market" is just to the east, and Plaza Garibaldi a few blocks south and west of there. 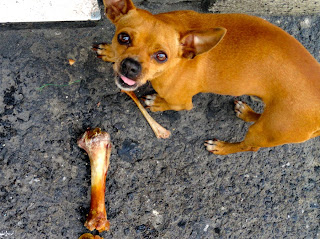 All along the dirty streets and endless corridors of Lagunilla market, blown by the cool breeze, on into Plaza Garibaldi,stray dogs and mariachis wander aimlessly, in search of a song, or someone to listen. 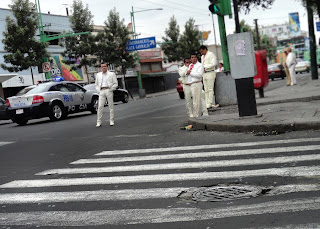 What do mariachis do when they're not playing? They stand around looking cool, that's what they do. 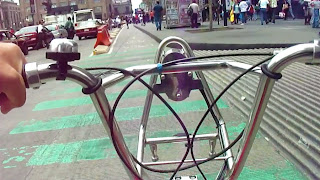 Riding the Ecobici (public bicycle) along the bumpy stone streets of the Centro Historico and back roads past the Palacio de Bellas Artes on to Reforma. Vehicles are everywhere and I sometimes found myself going the wrong way against traffic. No worries though, it just flows. 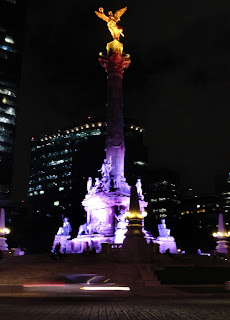 The Angel on Reforma

This evening I rode the public bike from the Angel on Reforma in to the Centro Historico and back. I have to admit it is a thrill to zip past and through all the traffic stuck in gridlock, cool air rushing by, all the while ringing the little bicycle bell. 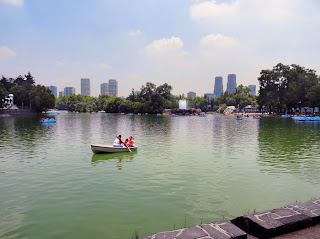 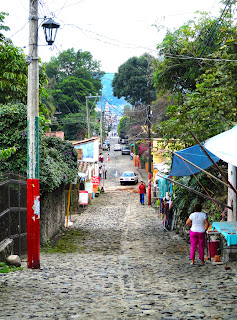 Today I travel to Tepoztlan, high in the semi-tropical mountains, about 50 kilometers south of Mexico City. It is the home of Tepoztecatl, ancient god of pulque and creativity. 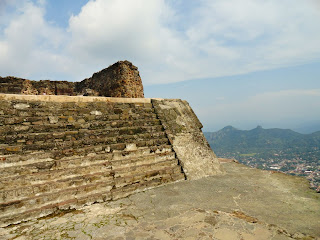 Pyramid at top of Tepozteco

Wow, I made it to the top of Tepozteco. It was a heart pounding one hour hike up the mountain, but worth every minute. The view from the pyramid of the valley below, the nesting vultures calls echoing through the canyons, and a surprise feast day parade with fireworks when I descended back into town. Exhilirating! And now I'm beat. 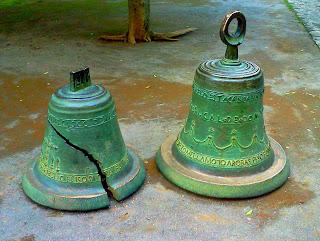 These are two of the bells in the courtyard of the Templo de la Natividad in Tepoztlan The inscription on one said 1831. Workmen were high above, repairing the bell tower.

"Barra!! Barra!! Cho-co-la-te'!! Milky Way!! Cinco, cinco, cinco pesos!! Cho-co-la-te'!!" The CD salesmen, with the blasting boombox speaker backpacks, haven't sold a single disc in all my Metro rides. The chocolate seller, on the other hand, is cleaning up. 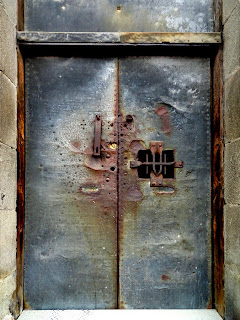 Mysterious, small leaded door, front facade of the cathedral, right at its center. Where does it lead to? What is its function? Maybe it's a janitor's closet, lol.


Cleansing ritual from the indigenous woman at the back corner of the cathedral. Charcoal smoke blown from a wooden censer, a whisk made of fresh herbs, and scented oil. When she finished, she looked at the eagle tattoo on my arm, then into my eyes, and pointed to the sky, saying "fly". 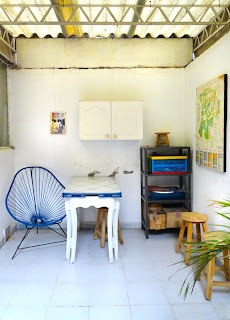 Sitting on the enclosed terrazo, I take in the sounds drifting in from the sky above: children singing, helicopters chopping the air, a droning church loudspeaker voice, whistles, the man yelling "Gaaaaass!" door to door, birds chirping, morning rituals, dogs barking, the pulse of dance music through the walls, a whole world in sound. 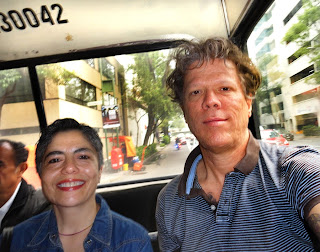 Riding on the Pasero, or Microbus

Riding on a pesero, or microbus, with my friend Berta, going to visit her gallery, in an ex-convent private university near the Centro Historico. The microbus, which covers the back streets, costs 4 pesos, whereas the larger red buses on the main roads are 6 pesos.

I stood on the side of the road at Hangare, the last Metro stop before the airport, watching traffic whizz by for 3-4 minutes straight, without a single break, before realizing this road cannot be crossed, and held up my hand for a taxi.
Posted by Randall Garrett at 10:54 AM No comments:


The last few nights waking at 3:30 am, I decided to sit out on the balcony porch and meditate. Sitting in the cold air watching my thoughts, the sensations of anxiety and exhaustion arise, then dissipate gradually into calm and emptiness feels empowering. Now I look forward to this middle of the night wakefulness. (04.03.13)

Coming to a deeper understanding of my work in regard to the deconstruction of iconographies and how it relates to my spiritual life. Buddhism is all about the investigation of perception and the realization that all our symbols and forms of meaning are provisional and constructed from a deeper perceptive reality. Looking back on twenty-five years of consistently exploring this in my art makes me think I was Buddhist without even knowing it at the time. (04.07.13)

Thinking back to a few years ago, without internet and driving the streets looking for a wifi connection, sitting in my car or else walking down the street 'til a signal popped up, then composing portentous emails charting and diverging my life's course there in the dark. (04.08.13) 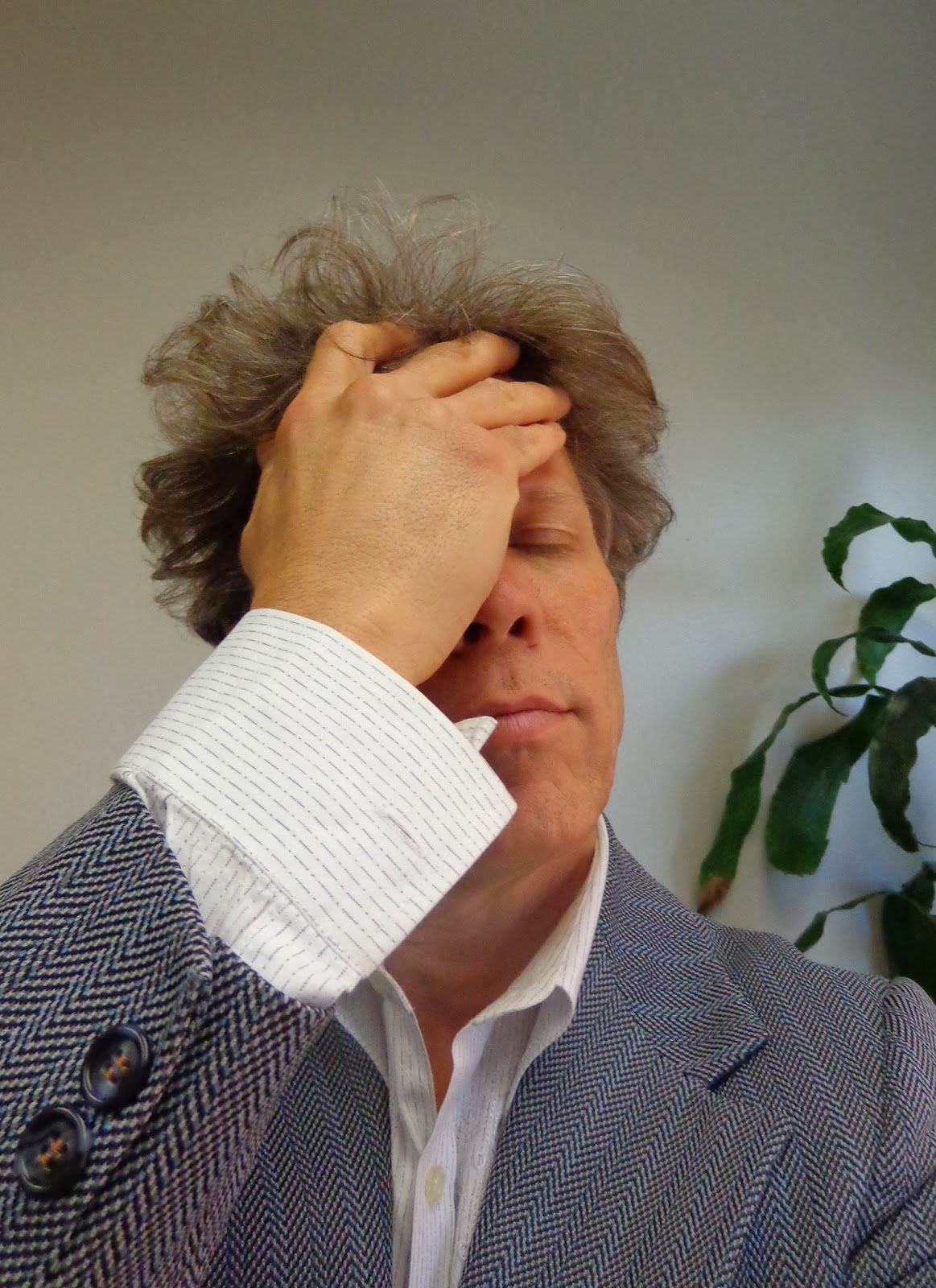 So this art student brings his submission to the gallery for the student show, and asks me, "can I price it at one million dollars?". Gesturing at the gallery around me, I reply, "no, does this look like a comedy club?". Jokers. (04.09.13)

Love or fear, love or anger, love or hatred, always an opportunity. It often feels like I get a second, a third, a fourth chance, and with each repetition, the hope to act with more wisdom and compassion than the times before. (04.15.13)

Beginning dream yoga practice again. The chakra visualizations during the night are difficult, but rewarding. There is a greater mindfulness or presence in sleep, rather than the feeling of being lost in another world. A recognition that is not so different from the daytime, of the mind generating images, content, and meaning, just as it does in waking life. (04.16.13) 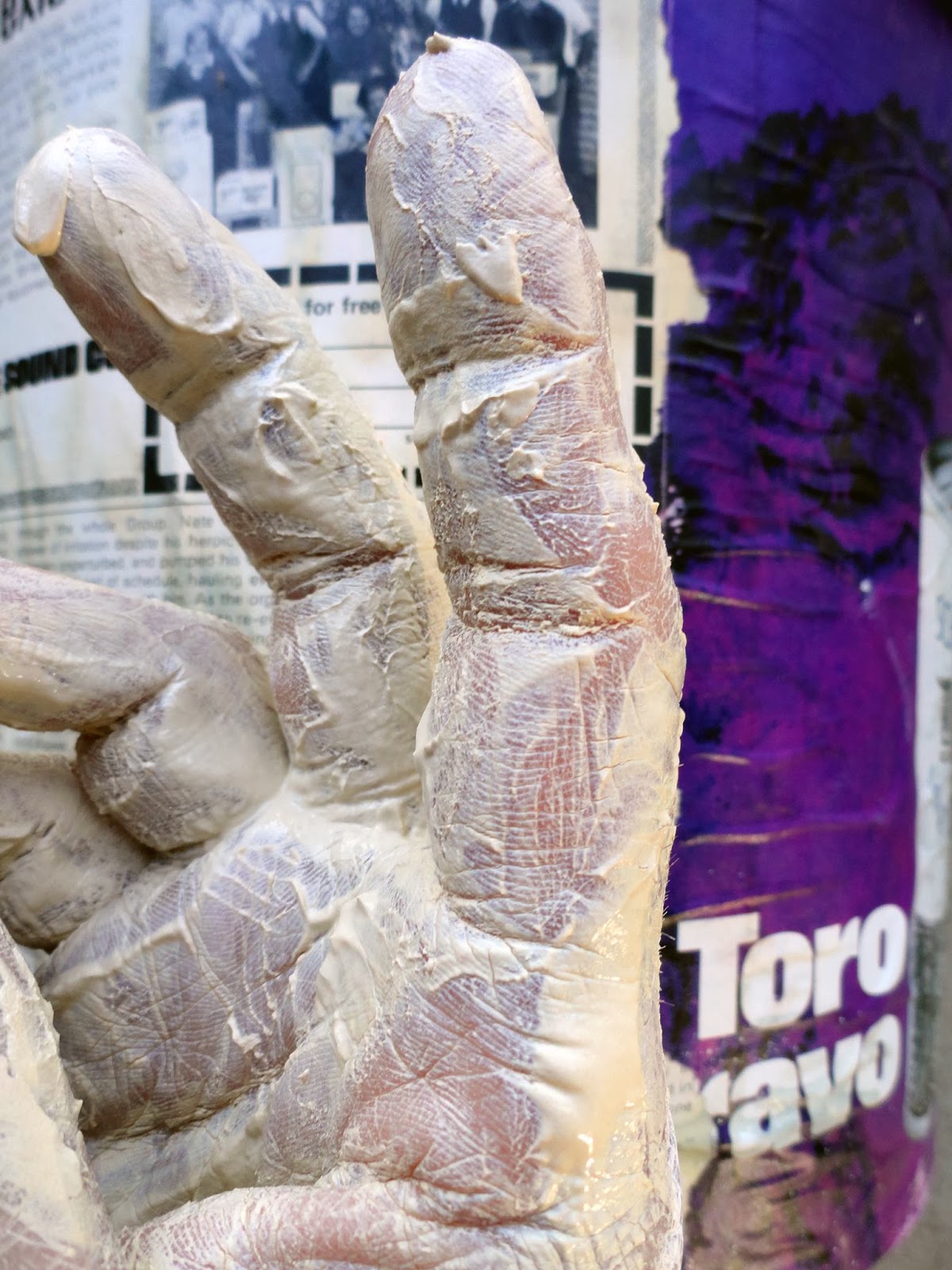 When one has a strong opinion on something, no matter what it is, the mind works in such a way, to interpret information that reinforces and confirms that opinion. The more difficult, but potentially more freeing option, is to maintain a mental state open to multiple overlapping possibilities as they occur. Engagement in creativity can help generate such a state. (04.20.13)


When I'm feeling stressed out, and investigate a little more closely, I find that much of my stress is self created. I also find that the stories in my head that generate the stress are just that, stories. Then I am able to clear my head, be present, and experience the situation in a more open and realistic way. (04.25.13)


Mockingbird is back at it, taunting the tom cat. It seems to really be enjoying this. Cat finally leapt up and tried to grab it, but was way off the mark. Fun little game they have going. (05.10.13) 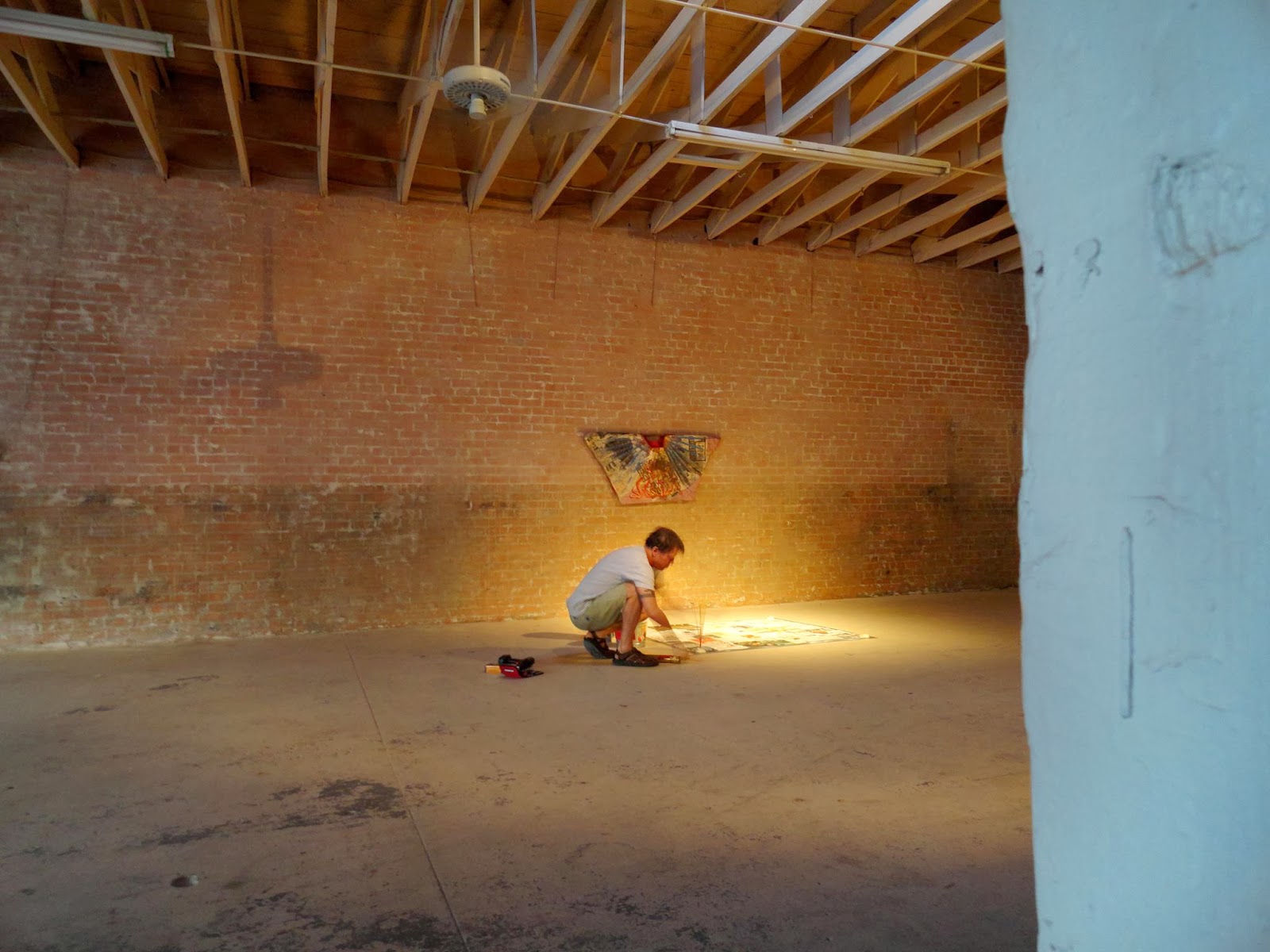 "Rigid view" is something I catch myself on frequently. I like to think of the mind like clay that we can soften and mold whenever it becomes stuck and resistant to change. (05.22.13)

Any moment can be holy, if it is entered into with complete presence, or mindfulness. Literally any action or circumstance, no matter if it be ordinary, blissful, or horrific, becomes sacred with full and present attention. Allen Ginsberg knew this, I hope to learn it too. (06.07.13) 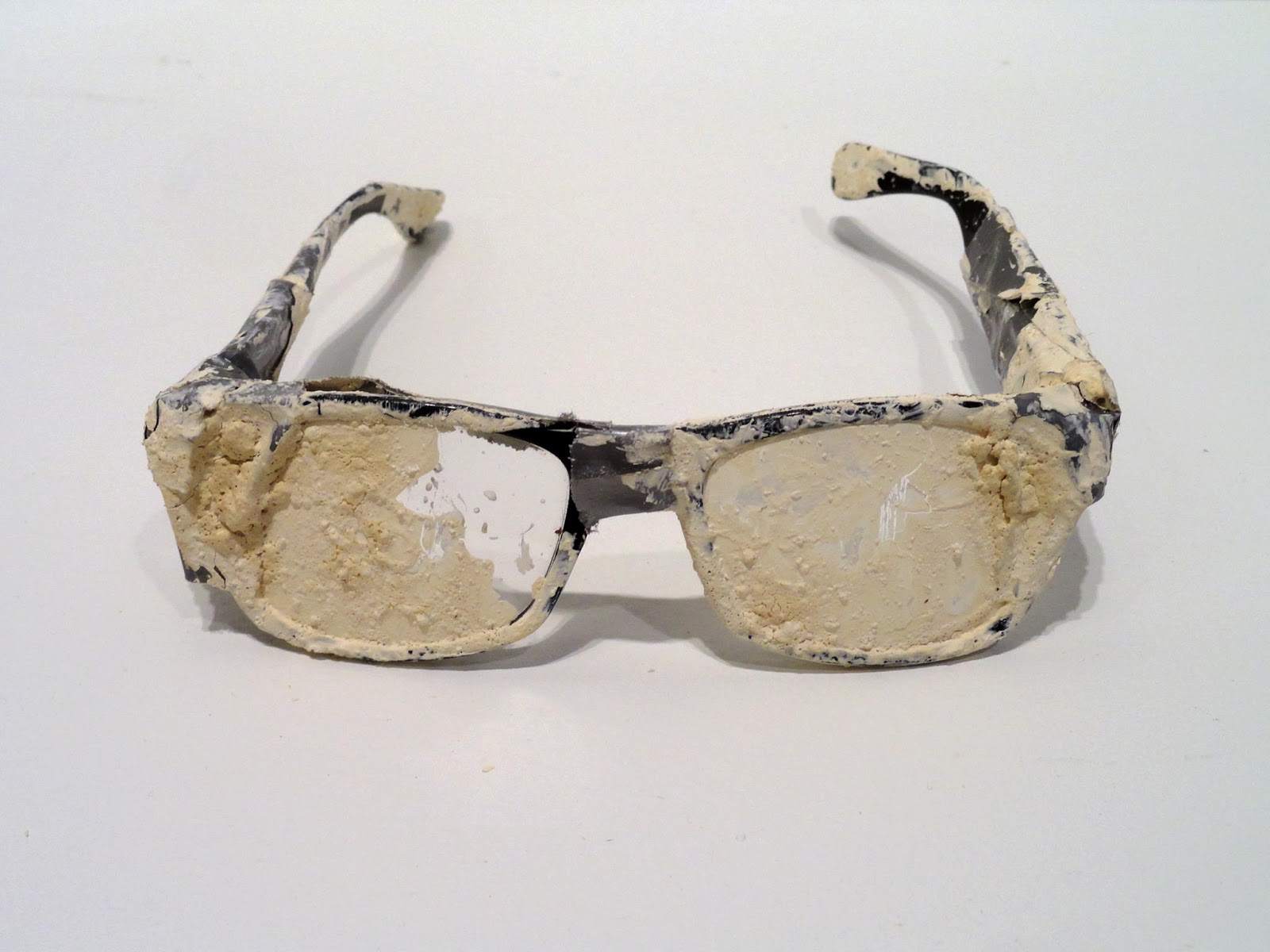 Wild morning... seven starlings are up in the broken tree, reading the riot act to the neighbor cat, who's exploring the fallen branches down below. He already caught one bird in the bushes earlier, and when I leaned out from the balcony to take a look, a yellow jacket wasp stung my hang when it strayed too close to their nest. Must have only been a warning sting, as it didn't hurt for long. (06.09.13)

In my dream, I was running in an open field with a giant brown bear. We jumped in the air, spinning back to back, three or four times like ballet dancers, our feet entwined, lost in the joy of life. (06.11.13)

Traveling can be a great opportunity to wake up, as it takes you out of your routine, helping to see things with fresh eyes. The strangeness of the human condition: clothing and customs as a form of identification, the disparity between those who have and those who don't, television as a catatonic distraction, the comforts of your own routine. The collective nature of our endeavor making internal modifications on our behavior at all times, whether we are aware of it or not. (06.15.13) 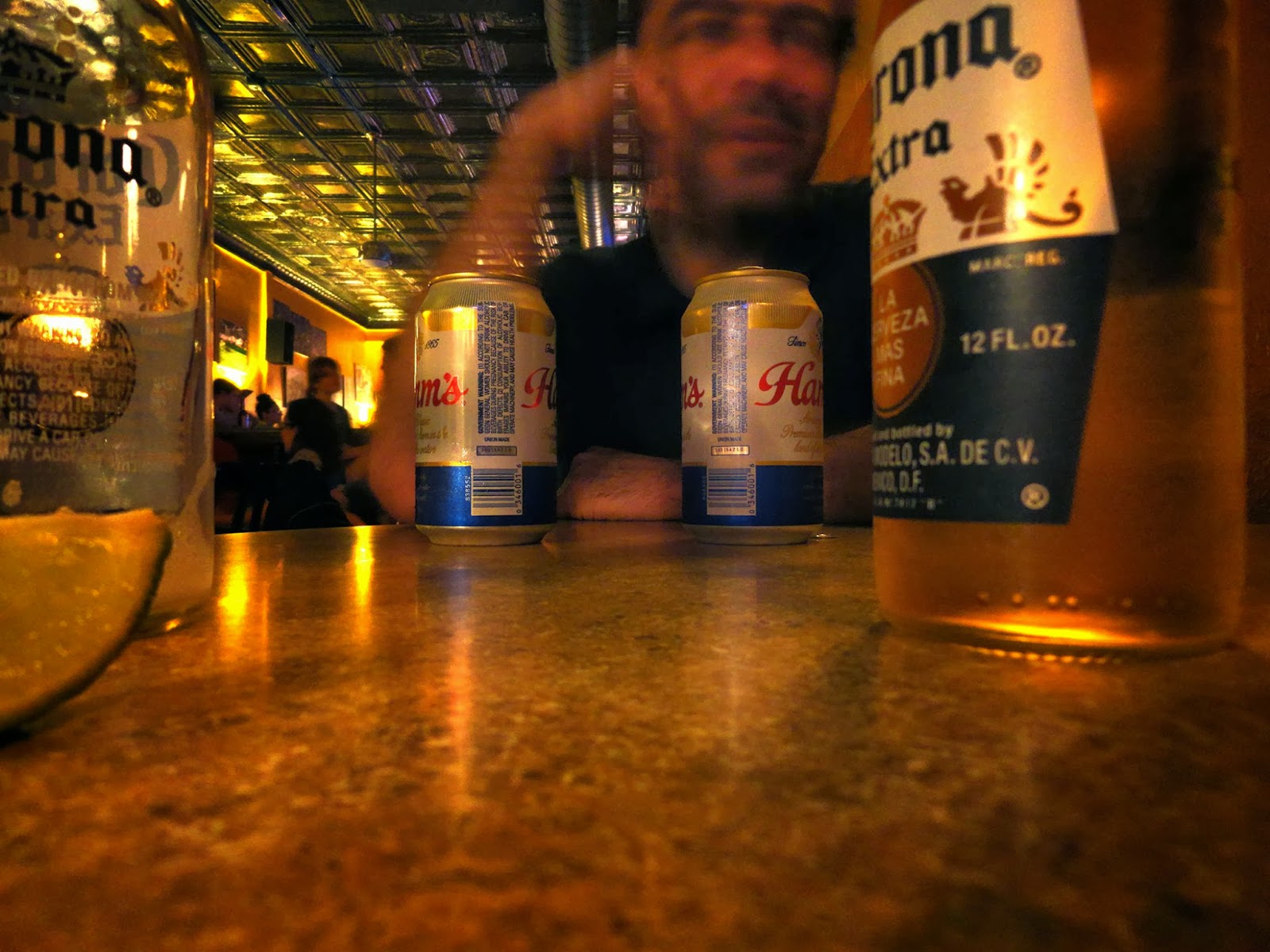 Walking back streets of Chicago last night, reflecting on the (mis)adventures of days gone by on those same streets, and thinking how it feels distant yet familiar, like a well worn book. (06.15.13)

Shooting the shit with Pedro Vélez at the Gold Star in Wicker Park. We watched kids shooting pool and caught up on things. He showed me the narrow alley leading to his old pad and talked about how quickly the once quiet neighborhood has changed. (06.15.13) 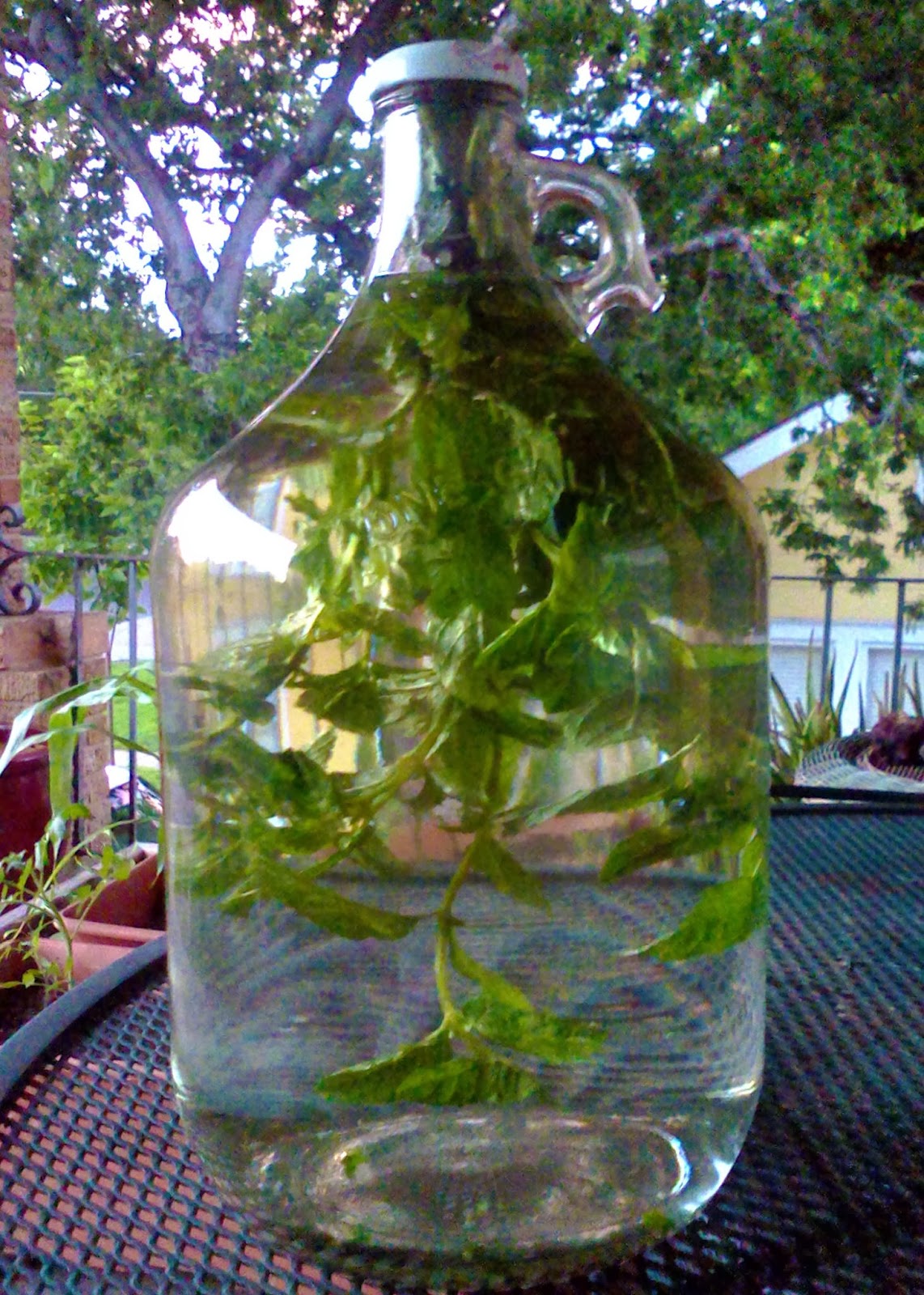 Sitting in my car, won't start, late afternoon sun. Waiting on a good Samaritan dakini to show up and give me a push start. Birds chirp, desert plants reach to the sky, and I lean my seat back. (07.02.13)

Posted by Randall Garrett at 9:42 PM No comments: