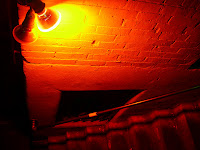 Staying with an elderly Tibetan woman on a mountain at 16,000 feet elevation. She is tiny and gaunt, with deep wrinkles across her face. Lying in the glowing embers of the fire inside of her hut are various hand-smithed metal tools: a spear, a hoe, and a third, unknown implement. I look up from the fire, seeing her face in the shadows, and ask her to teach me how to make these tools. (June)

Working in a hospital as an orderly. A helicopter drops through the roof, and a team gets out, unloading three clear bins of organ transplants, floating in water. They set them on a bed. I clearly see a heart in one bin, still beating, and note that it is alive. Doctors come into the room and push me down the hallway, closing the doors. Walking further down the hall, I see Dustin Hoffman, playing a character who has lost the top half of his head and all of his brain. He is gesturing at me as though he wants to talk. I then realize that this is a movie, and that I am playing a role. (early July)

I watch Billy Bob Thornton in cut-off jeans flirting with an attractive woman. He is unkempt and hasn't shaved in days. He drops down on all fours, scampering away down the median of a road, looking back to urge the girl to come along with him. (July)

I am on the wing of a plane that is flying thousands of feet above the earth. Upside down, I cling to the wing, without concern for the greatness of height. I climb into the cabin through a broken window, and find myself in the company of other fliers, about 5 Latin men with aviator goggles. We each grab at and pass around sheet music, which is blown about by the wind passing through the cabin, and once settled began to sing "Special Lady" by Ray, Goodman and Brown. (mid July)

In an SUV, driving another gallery owner to the airport, I realize that I am sitting in the backseat with her, and that the vehicle is driving itself. As we are about to pass under a bridge, I see a plane on the runway above, then look out at the highway and marvel that we are going straightways along it. Becoming concerned that no one is behind the wheel, I lean forward, stretching my body until I am in control. Then, the traffic becomes unpredictable, and I am forced to steer off the road, as large rocks begin to congest the highway. Steering with precision, I maneuver around the boulders, while also avoiding the chaos of the other drivers. (mid July)

Driving an old beat up pickup truck in West Texas. My dad is riding in the passenger seat. We travel over rolling hills, coming to a landfill. I realize it is the wrong path, and put the truck into reverse, then turn onto another road. It is a steep hill, which overlooks the city at its top. I realize I am dreaming, and gun the truck over the hill, flying into the air. Suddenly, the truck is gone, and I am flying in the open air. (early August)

Fighter planes flying low, pursuing helicopters. Machine guns strafing the ground in my direction. Running into a grove of trees, I step into a hole in a large cedar. Inside it is open and expansive, its smooth walls the size of a house, and forms a refuge from the conflict. (early August)

Posted by Randall Garrett at 11:05 PM No comments: