Toward an Anarchism of the Sacred (pt. i)

Toward an Anarchism of the Sacred
(pt. i - on the Four Questions of McLuhan) 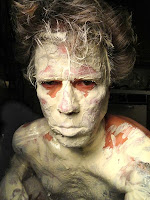 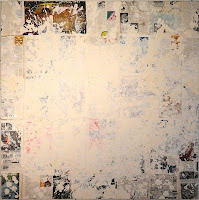 To Dissolve Space Into Luminosity (2013) - performance video
With regard to McLuhan's Tetrad, the artifact in this work, that is what remains after the performance, whether it is conducted privately in the studio or live in the gallery, functions in some ways like, or in reference to the visual language of icons, whether in the context of religion, politics, or advertising, as some form of direct embodiment of the sacred aspects that the performative actions make present, what institutional traditions call sacramental, heroic, or branding. 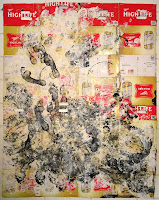 eating, drinking (2013) - performance video
Since the profane functions only in regard to what is considered sacred, both are encompassed in this work, drawing attention to the perceptual subjectivity of such distinctions, as exemplified in the simultaneous currents of high art and kitsch. Though such labels have been eroded in the last century, they still retain much of their potency. So, this work can be said to equally make reference to the signification possibilities of both sacred and profane, without attaching hierarchy to either.

And so, in regard to the four questions of McLuhan:

1. This work "enhances" the open-ended poetics and immediacy of formerly closed iconographic signifiers, through performance (ritual) and artifact (icon).

2. At the same time it erodes the authoritarian meaning behind these symbols that have become institutionally controlled, freeing them up to new and open ended possibilities.

3. It does this by retrieving and expanding upon earlier, mythological uses of these iconic images, cognizant of their earlier meanings, and of as yet unknown potential new ones.

4. And what it reverses or flips, to use McLuhan's terminology, is the power structure behind iconic images, where before they were controlled by the institution in order to perpetuate its power, here the artist regains control of the image, ironically, by entering into collaboration with the viewer on new ways of experiencing familiar forms.
Posted by Randall Garrett at 8:34 PM No comments: