"I've looked at clouds from both sides now, from up and down, and still somehow, it's clouds illusions I recall, I really don't know clouds at all." - Joni Mitchell, Clouds

"One potent metaphor for the Void, often used in Tibetan art, is the sky. As the sky is the emptiness that offers clouds to our perception, so the Void is the 'space' in which objects appear to us in response to our attachments and longings." - Phillip Rawson, Sacred Tibet

Yesterday evening, I watched a gathering thunderstorm as I walked. Having brought along my camera, I began to take pictures of the clouds, slowly, deliberately. These images became the starting point for an exploration of the processes of the mind, to look at the ways in which it constructs meaning, reinforces its own conditioning, and attempts to justify its own existence. 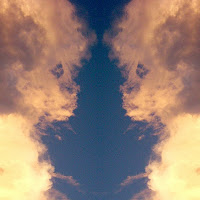 Later, as rain fell outside, I worked with the images on my computer, cropping and mirroring, using pattern and repetition to create fractal heavy mandalas from the original photos. As I continued, striking images emerged, some humorous, some haunting, all demonstrating 'clouds illusions' quite vividly.

From one image, two faces, framed by large curly locks, stared intently into each others eyes. In another, a pair of devilish skulls guard either side of a dark chasm. In a third, a wrathful Tibetan deity looks out at me with googly eyes.

And then I realize, it's all there...and not. It becomes clear that the mind looks for and sees not only anthropomorphic patterns, but also, and more subtly, connects to and reinforces the layers of memory and interpretation that it has already created. 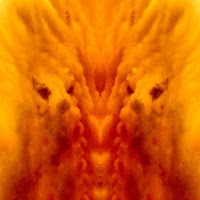 So my conditioned responses tend to see Dio album covers, Franklin Ajaye in the movie Car Wash, Thangka paintings, angry wolves, and, duh, sexual members both positive and negative in form. Depending on the time and place of your existence, you will see what is particular to that experience.

It was a potent realization of the ways in which we as sentient beings take in essentially neutral phenomena, and project onto them our sense of meaning and identity. 'What you see is what you get', right?

Guess again: that is where the Matrix effect kicks in, as the images metaphorically tumble into cascading 1s and 0s, and reality begins to unfold with more clarity. The constant procession and change of the clouds in a blue sky is equivalent to the ongoing mental processes taking place in the mind. 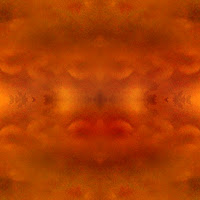 And this vivid demonstration reveals that the 'I' which sees and experiences all of these things is just that, another formation of changing clouds passing through a clear sky.

So...I...let it go... With awareness I can watch these transitory thoughts and images as they rise and fall, seeing them as temporal chatter unfolding against the backdrop of a larger, undefined reality. 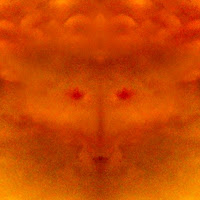 It's all an illusion, not in the sense of being fundamentally unreal, but in its incomplete grasp of that reality. And yes, it's a richly immersive illusion at that, but still nothing to be attached to, or held onto for long.

Yes, it seems that I lost my 'self' in the clouds of last nights thunderstorm.
Posted by Randall Garrett at 1:12 PM No comments: