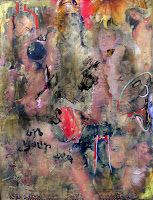 passed out, feverish for days he lay among the rubble. dishevelled piles of stones around him as though burial mounds from some forgotten war. eyes convulsing, he dreamt in rapid fire sequences, image upon image, travelling somewhere rapidly, never at rest, never at peace.

a sound among the ruins and he awoke, it seemed into yet another layer of perception. in the shadows, she was there, crouched and slinking towards him. she crawled the last few feet, drew near and mounted him furiously. plunging into him with a vengeance unrestrained, she leaned in close, as though to steal his breath away. he felt relief give way to fear and panic, as the thrusts turned to violent spasms.

now others came upon them in the darkness, lovers from past lives, themselves in various guises. they joined them, forming a writhing mound among the fallen stones. all the bodies they had ravaged from here to eternity joined in at once, flailing away at every orifice, as flesh began to tear and blood mixed with come and sweat. he mocked her and turned to move away, but was pulled back into the fray.

finishing now, they kicked her back and onto him. he screamed yet nothing came out, the weight of those around and on them having expunged the air from his lungs. the mass of flesh continued to move for a time. some retched now, and gradually all turned back to silence.

some time later, he began to scratch and claw his way out from under the pile of bodies. bruised and shaken, his blood mixed with semen, bile and earth, and congealed into a crust upon him. slowly regaining his senses, he began to break off and pull away chunks of the putrid mud from his skin.

he stumbled now to the quarry, grabbing the last of the kerosene and turned back to the mound of bodies. approaching, he saw her crawl out and away into the darkness. without hesitation, he flung the kerosene onto the remnant, struck a match and threw it onto the pile.

a ball of flames rose up and with the dry blast of a furnace, violently threw him back and onto the ground. burning flesh and bone transformed to huge chunks of ash and sparks as they lifted up into the night sky. scorched now, he threw the holy books, votives and sacramentals that remained onto the pyre, turned and staggered away into the night.
Posted by Randall Garrett at 3:15 PM 1 comment: