in first grade, he threw a rock that hit a girl in the head. it was an accident, he was just enjoying the way the rocks spun through the air when he threw them. her platinum blonde hair erupted in blood, and next thing he knows, the teacher dragged him up the hill to the classroom, where the principal came and read him the riot act.

one day in second grade, the teacher, a grumpy old woman, lined him up with all the other boys on the playground and swatted each one as she went down the line. he never knew what offense led to this, but all the girls in class were laughing.

in third grade the kids were all playing baseball during recess and he was the catcher. he knelt down to catch the pitch, and just as the older boy swung the bat, she caught his eye. whammmm!!! he's crawling along on the ground, stars swirling around his head, and blood gushing from his cheek. seven stitches later, he returned to class.

fourth grade saw the class moved to a portable building, and he sat behind a cute girl with pig tails. he thought it would be funny to whack her over the head with the plastic tissue bag she kept under her seat. whackkkk!! she started screaming and crying. uh-oh, he thought, there was something hard inside of the bag. the teacher reached in and found an empty cosmetic jar. grabbing him, she dragged him out of class and hit him repeatedly with her ping pong paddle.

in fifth grade the kids liked to run around back and smell the honeysuckles on the fence. one day as the girls were chasing him, he ducked around the edge of the building. cutting a little too close, he sliced his head open on the aluminum trim. this time it only took four stitches and a partially shaved head to return to class.

his last year in elementary school, sixth grade, went smoothly. he kept mostly to himself, until the end of school field trip. at the miniature golf course he thought it would be really cool to slam the ball hard and make it fly off the astroturf ramp. zoommm!!! the golf ball flew through the air, its trajectory on a perfect arc to the side of the girl's head, the one with long straight hair.

next year, seventh grade, he moved to junior high and a new school. he stopped talking to the girls for the next few years and began to focus on his trumpet playing.
Posted by Randall Garrett at 12:32 PM No comments:

(since my baby left me) the well's run dry 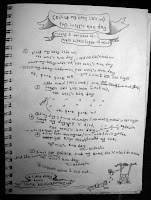 - a little ditty from uncle krishnaremus
Posted by Randall Garrett at 10:44 AM 1 comment: 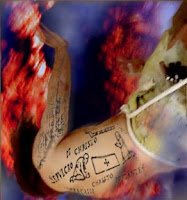 down, down he trudged, through thick smoke, exhaust mixed with the tinge of human sweat and rotting waste. the crush of bodies pushing against, some moving upward, some down, eyes averted each in their own self-made inferno. a few more steps and there he lost his balance. turning in the air it all came to him, every suffering he had inflicted on all of these, the loved and the unloved. falling only a moment yet interminable, he knew it would hurt, and then he hit bottom. blackness, and all around a fog, lying on the mix of footsteps and grime. it was then she came to him, a movement so slight, a gentle touch in this blindness. grasping, lunging, lost in the foul air he felt himself lifted up and against a firm shoulder and the softness of her skin. lowering now, he moved in close, enveloped by her as blackness closed in again.
Posted by Randall Garrett at 2:09 PM No comments: