nightfall, another hot gulf coast night, found us walkin' down the tracks to a show at crawlspace, a second floor artist-run gallery overlooking this machine shop. chase was runnin' the space then, and had some drawings by a tall gangly vampire fella on the wall. comin' up the rickety wooden steps i bumped into betty, who threw me a sweet if slightly off-kilter smile.

i took a quick jaunt around the show and then settled into the comfy sofa in the boutique area. chase took a quick hit off his wood pipe and then proceeded to show us this cool new video game he had just picked up, "kamachama yo' mama". cardboard critters, woolen doo-dads and other knick-knacks stared down at us from the wall as we focused in on the little 10 inch color screen.

it was 'bout then that betty launched into one of her stories. this one started (like all the others) with a smile that slowly spread from one side of her face to the other, followed by a gleam in the leading eye.

"yeah, my boyfriend and i, we were down in mexico, and he had this great plan to buy up boatloads of liquor at great prices and then smuggle it back into the states so we could have it for some big parties, like. he had seen it done in the movies before, so we knew it could work."

"so he bought up all this booze and then stuffed it into a backpack, and loaded it on me to carry over." (long pause) "he knew they wouldn't suspect me, so he went on ahead and crossed over, then i followed a few minutes later, hee-hee."

suddenly she was distracted..."hey that's an awesome video piece you designed, chase." (he had been playing "kamachama yo' mama" this whole time) "how'd you do that anyway, i mean how'd you make that video? you oughta market that thing to burger king, they'd go for that big time, you know what i mean?"

"that sounds great, betty", chase said absentmindedly and continued to rack up the points on his game. we looked on as the night heat closed in on another round of drinks and more stories from betty.
Posted by Randall Garrett at 10:57 AM No comments: 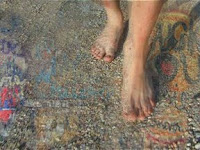 he walked along the desert road with his father. a dirt pathway diverted up the ravine, looking like a gully washed out by the last rain. they followed it up and over the earthen spine, coming upon an adobe church, empty and open to the elements.

inside they walked, past flickering candles, and out again, this time into the courtyard. a monumental sculpture loomed ahead, an oversize wooden chair with basket-weave seat all cast in bronze, double life size.

"el diablo" his father exclaimed as they rounded it to the front. seated on this monstrosity was a sculpted devil, a typical one with horns and spiked tail, seeming vaguely cartoonish. though of human scale, he was dwarfed by the giant bronze seat and looked rather infantile perched on this impromptu throne.

they continued on past the seated devil through scrub into the desert wilderness, moving into the late afternoon sun.

he drove the old land rover over the dirt road, pushing the accelerator as it threatened to die on him. his teenage son fidgeted in the passenger seat and leaned out the open window. the wind was picking up now and heavy black clouds were moving in fast.

for a moment he considered going back and trying to retreat from the storm, but then he gunned it, going full blast into the approaching melee. whirling black clouds dipped down, and dissipated smokelike as they whipped around the plodding vehicle.

the road grew muddy as they moved into the deluge, with vegetation and debris slowing them little by little. finally they came on a roadblock formed of two huge fallen logs. he looked over to his son and then jammed on the pedal, hitting the logs with the full force of the steel hulk.

coming out the other side, they slowed to a stop in the parking lot as the storm cleared and moved away behind them. his son hopped out and ran around to the front of the truck. "fuckin' a..!" the hood was crumpled up, but otherwise intact.

he got out, checked the oil, and got in the passenger side. his son now on the drivers side turned the key, slapped the transmission into drive and they lurched away.

he cradled the rolled up posters under his arm as he went into the school, walking down the hall and scanning the classes as they passed. the rooms buzzed with activity, kids in parochial uniforms collectively reciting math formulas and language phrases. she came with him, and together they went into the monk's workshop. "i don't know if you can use these, but i'd like the school to have them", he said.

the young monk towered over them, looking vaguely buddha-like with newly grown black stubble coming in on his recently shaved head. "i like this one" he said, pointing to a poster of two people lying on a bed having sex. "we can use it to both teach and provoke."

at a loss for words, he looked her way and nodded his head toward the door. she smiled and they scooted out into the hallway, down the freshly mopped glistening terrazo floor and out the double doors into the bright sunlight of the playground.
Posted by Randall Garrett at 10:50 PM 2 comments: