the old ways no longer work.

though they still stand, they are incapable of carrying meaning.

those established forms will either evolve, or crumble.

there are new forms emerging, sprouting up from among the ruins.

they will engage new directions, even as the old gives way.

we are in this transitional space already, even though it is not readily apparent.

the old symbols continue to serve a function, that of providing a framework,

even as they are subsumed into the new.

the earth goddess, ancient rome, mithras, each had their time and place.

when they were no longer beneficial, new forms came into being,

born out of and adapting what was useful from the former.

and so it is with the time and place in which we find ourselves, here at the cusp of something new.

Posted by Randall Garrett at 12:46 PM No comments: 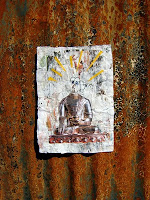 
These are new works on paper I've just finished. The project began as a "tabula rasa", in which I would complete a collage, then paint over it, obliterating the image, and lastly add a final layer to coax something out of the background.


They were conceived as band posters for a bar in a decrepit alley behind an ancient cathedral. 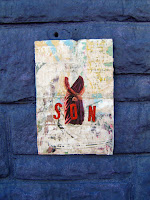 
I place them on the street, some in alleyways, some outside of a club, or by an old railroad trestle, and photographed them in each of these settings. 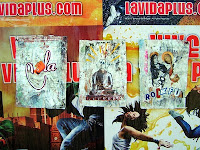 
The energetic history of each of these locations interacts vividly with the works. This is a fundamental idea that comes out of my curatorial projects, that of art existing in real world contexts.
Posted by Randall Garrett at 10:22 AM No comments: