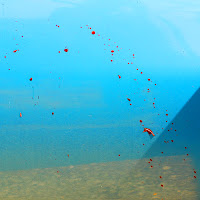 the back room of a quiet suburban neighborhood home. they lay there on the carpet, the blue sky of dusk tinged with crimson coming through the skylight. she looked at the pizza menu. his mind loosed, then dropping away into a void, a darkness where blood coalesced, then splashed away by a flood of water.

"ok we're getting pineapple and jalapeno, my favorite!" she said, then a brief silence. suddenly he was back in the present, a loud pounding on the back fence and a shouted "auxilio! auxilio!". at first it sounded like punk rock, but something was way wrong about the sound. without thinking, he leapt up and ran into the garage, pushing the automatic door opener.

she followed, with an overwhelming sense of dread, and yelled "don't go out there", but he didn't hear her as he looked for a stick or some kind of weapon. she stopped at the back of the garage, anger in her bones at his impulsive rush into this.

as the door lifted, he ran out onto the drive, and stopped cold. a suburban looking brown-skinned man, orange t-shirt on all fours at the end of the driveway looking up plaintively. three thugs in black ski-masks stood over him yelling, punching, kicking.

again, without thought, he blurted out the lie: "get the fuck outta here, the cops are on the way!". immediately they started to run down the alley, and the crack of pistol shots rang in his ear. he froze in place at the hood of the minivan wanting, but unable to move. the man on the ground stared up and into the last eyes of mercy he would ever see.

an eternal moment, and he sprang to life, running into the garage, hitting the switch to close the door and falling into the house, almost knocking her down. he could hear the working of the mechanism, closing slowly, way too slowly.

the man, hit now and spurting blood in gentle arcs, crawled toward the narrowing slit of the garage, and collapsed at the foot of the minivan. lying there, bleeding out and fading, his last image of this earth a sideways view up and into the now red speckled blue sky.

in the house, they stared intently into each others faces for a moment, and he left her again, going out the front door and sneaking around the side of the house. lying low, he watched a black navigator,the last of the crew, pull out of the alley. there was no body, only pools of blood.

fifteen minutes later, one cop car arrived out front, and two officers spilled out and into the alleyway. they stood in the front yard with some neighbors, waiting for some news, and tensed up as the thugs pulled by slowly in front of them.

"we have to leave now", he said. back inside, they furiously piled clothes in a bag, enough for a couple of nights, and ran out to their cars. as they pulled away from the curb, one behind the other, two vehicles passed them, and then dog-legged around the cul-de-sac to get behind them again.

his heart pounding, he dialed her cell phone and yelled "they're following us!". they were almost out of the neighborhood now, and saw the flashing lights of a cop car who had someone pulled over. "pull up next to the cop, alright?", and he hung up the phone. the truck and car following them passed slowly by and exited onto the main road.

catching his breath now, he waited thirty seconds before they pulled onto the road again, and drove up a block to the highway bridge. sitting at the stoplight, he paused and then ((whammm)) a car rear-ended him, pushing his car into her truck.

"christ!" in a panic, he dialed her number again and yelled into the receiver "go! don't get out of your truck!" they pulled ahead and the car sped past them. he was breathing rapidly now as she jumped out of the truck and ran back to him.

"breathe, o.k.?", she said. "hare krishna, hare krishna, krishna krishna..." she calmed him enough to drive, and they pulled away, into the oncoming night.
Posted by Randall Garrett at 4:15 PM No comments: