Sitting on the fire escape he looks down, eight floors to the ground below. Concrete, stone and steel, the city, tough and relentless, a lighted neon cross blaring "Jesus Saves" from the street front mission, car horns shouting as traffic rushes to the stoplight, people hurrying along the walk.


Slowly he takes a drag from the cigarillo, the warmth and fire pulling into his lungs. Closing his eyes, he feels the smoke inside balancing out the cool blasts of wind buffeting them high up the city's side. He feels himself falling into a dream now, a place where peace washes over him, of soft grasses and flowing water under a canopy of trees.


She climbs through the window and sits beside him there on the balcony. Forgetting their suffering for a moment she says, "this is kind of nice" and he opens his eyes, looking up at the softness of the sky and beyond. Pouring a sangria over the ice in the plastic cups she hands him one. "To nice" he says, and tips his cup into hers.


Down, down he trudged, hugging the wall of the narrow stone staircase, the abyss looming just beyond. Through thick smoke, exhaust mixed with the tinge of human sweat and rotting waste, the crush of bodies pushing against him, some moving upward, others down, eyes averted each in their own self-made inferno.

A few more steps and there he lost his balance.


Turning in the air as he fell, it all came to him, every suffering he had inflicted on these souls around him, both loved and unloved, all of them. Falling, only a moment yet interminable, he knew it would hurt, and then he hit bottom. Blackness, and all around a fog, lying there on the mix of footsteps and grime.


It was then she came to him, a movement so slight, a gentle touch in this blindness. Grasping, lunging, lost in the foul air he felt himself lifted up and against a firm shoulder and the softness of her skin. Lowering now, he moved in close, enveloped by her as blackness closed in again. 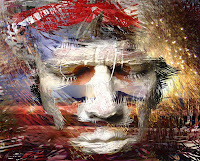 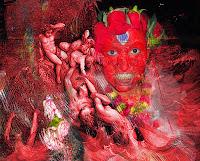 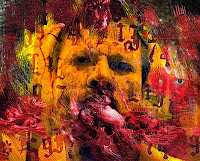 
Passed out, feverish for days he lay among the rubble. dishevelled piles of stones around him as though burial mounds from some forgotten war. Eyes convulsing, he dreamt in rapid fire sequence, image upon image, travelling somewhere rapidly, never at rest, never at peace.


A sound among the ruins and he awoke, it seemed into yet another layer of perception. In the shadows, she was there, crouched and slinking towards him. She crawled the last few feet, drew near and mounted him furiously. Plunging into him with a vengeance unrestrained, she leaned in close, as though to steal his breath away. He felt relief give way to fear and panic, as the thrusts turned to violence and obscenity.


Now others came upon them in the darkness, lovers from past lives, themselves in various guises. They joined in, forming a writhing mound among the fallen stones. All the bodies they had ravaged from here to eternity, flailing away at every orifice, as flesh began to tear and blood mixed with come and sweat. He mocked her and turned to move away, but was pulled back into the fray.


Finishing now, they kicked her back and onto him. He screamed yet nothing came out, the weight of those around and on them having expunged the air from his lungs. The mass of flesh continued to move for a time. Some retched now, and gradually all turned back to silence.


Some time later, he began to scratch and claw his way out from under the pile of bodies. Bruised and shaken, his blood mixed with semen, bile and earth, all congealed into a crust upon him. Slowly regaining his senses, he began to break off and pull away chunks of the putrid mud from his skin.


He stumbled now to the quarry, grabbing the last of the kerosene and turned back to the mound of bodies. Approaching, he saw her crawl out and away into the darkness. Without hesitation, he flung the kerosene onto the remnant, struck a match and threw it onto the pile.


A ball of flames rose up and with the dry blast of a furnace, violently threw him back and onto the ground. Burning flesh and bone transformed to huge chunks of ash and sparks as they lifted up into the night sky. Scorched now, he threw the holy books, votives and sacramentals that remained onto the pyre, turned and staggered away into the night. 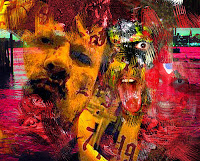 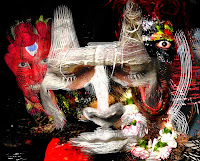 
The monks, in sand colored habits, seated themselves in concentric rings rising up the inside of the beehive like structure. At the base and looking up at them, the elder abbot, of indeterminate sex, with a head of shaved stubble, began speaking of the glories of dying in this way, of how nirvana awaited directly on the other side for those who gave themselves willingly to it.


He knew that the only chance to survive was to sit near the top of the hive, where a window afforded an escape if he could not hold his breath. Finding his place, he sat and leaned with the others into a fetal position. The last thing he saw before closing his eyes was the shaved heads of row upon row of young male devotees. Then, the snakelike hiss of gas as all faded to blackness.
In the dark he felt himself lifted up and outside the temple, and stepping out from the darkness quickly stole up the hillside the stupa was built into. By the flickering firelight he saw an old monk directing bhikkus in the disposal of the bodies.


Walking through the aftermath, he pulled the cowl over his face to avoid their gaze. Stepping into a room filled with scattered bodies, he felt the energetic scurrying of a multitude of creatures: ants, grasshoppers, crabs and the like, all devouring each other as they swarmed on the parched ground.


Reaching down, he picked up a grasshopper, and watched as it ate a tiny ant, even as it was being consumed by a much larger one. The creatures began crawling on him and biting his hands and legs. He brushed them away, but then became fascinated by the insistence of their actions, and bevoming still, watched as they continued to swarm.


The night opens up under your wheels: black, empty and infinite. A multitude of stars reaching up and out to forever, and inward just as far. You feel your heart open too, like an orchid in the darkness. And then Freddy Mercury, on your Ipod singing "Oh, won't you take me home tonight", just as morning breaks in your rearview mirror. Now colors gather on the horizon: orange, cyan, magenta, and chase the night across the sky, the same as every morning, only this time you're here to see it unfold. So you follow the colors too, as they lead you back home.