“Mercado Efimero Contemporáneo & Original” art fair took place over the weekend of September 13-14 in the Roma Norte colonia of Mexico City. Organized by Aldo Iram Juárez, director of Galleria Progreso, the event was originally conceived of as Zona Meco, a low-budget indie gloss on Zona Maco, the mega art fair taking place each spring in Mexico City. At the last moment, under threat of unspecified legal action, the name was changed to its current, altered form.

Taking place inside the building of the former Partido Popular Socialista, fifteen art collective and editorial projects, fourteen artists, and eight performers participated, representing a cross-section of artist-run and underground initiatives from Mexico City and the surrounding State of Mexico. A lively scene unfolded in the atrium space, under the watchful gaze of the heroic statue of Vicente Lombardo Toledano, and his epithet, “The Revolutionaries, We Are Sentenced to Victory”.


Each artist and project space displayed their wares on tables spread around the tightly packed room, bracketed by an informal stage with intermittent performances, forming an energetic hive of activity. Around the perimeter of the space were situated the collective projects, with dedicated artist tables in the center.

The BORDO and Mal d3 Ojo collectives, both from Neza, a working class suburb of two million people on the southeast edge of Mexico City, brought a punk aesthetic to the event with an assortment of t-shirts, stickers, and bookworks. Flores Rosa and Cien Pies presented a more neo-hippie / earth friendly vibe with their displays. Flores Rosa had “Cigarros de flores”, brightly colored handmade packages of floral cigarettes, emblazoned with the slogan “Smoking flowers is harmful for the health of the patriarchy”.


Near the front stage was the Mu collective, and their smartly packaged zines and microchip audio files featuring experimental electronic compositions. On stage behind them, a young feminine Jesus figure read poetry from a pseudo-Bible in the performativity of a Bible story guru, as event organizer Iram set up a video projection for the next performance.

In the center of the space, an assortment of artists presented their work in more traditional media, including ceramic, painting, sculpture, and photography. Notable among these were the work of Ramsés Olaya and his gestural porcelainware ashtrays and incense holders with images of skulls, ice cream cones, and canines. The process sculptural works of Bruno Martinez included a cast plaster boxing glove in patina, and a Star Wars fighter made of bright yellow DHL freight shipping tape.

The scene did well to manifest its vision of “an event that brings artistic initiatives, independent and of the character marginal. These individual and collective proposals have no figure in the institutional agenda, and do not represent a commercial gallery. Artists promoting their work for themselves.”


As such, it presented a counter-proposal to the mainstream mega-fair that its original name parodied, and even more importantly, a fluent cross-section of indie and diy art collectives from across the city. 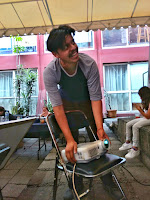 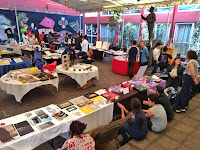 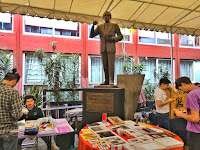 (left to right) event banner on street; statue of Toledano 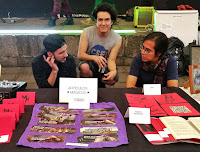 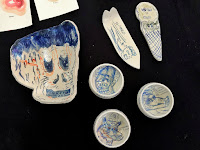 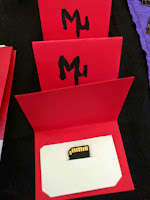 Bruno Martinez sculpture
Posted by Randall Garrett at 10:28 AM No comments: