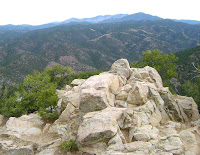 standing outside the slightly ajar door, i breathed out the crisp morning air. pushing it open i saw jake, tall and skinny, long stringy gray hair like phil spector in a fright wig. "i'd shake your hand if mine wasn't already clean", he said. i got with the other guy, jack, and we loaded the first trunk onto the trailer.

a dozen trunks later, the place was still filled with garbage. i noticed a five dollar bill, two ones and a stack of dark chocolate bars in the pile. "i gotta get outta this town", jake said, "the people here are energy vampires, they'll steal your energy with all their new age bullshit." we loaded some cartons of bottled water next. "i've only drank evian for the last thirty years", he added.

his adobe backed up to the mountain, it's peak almost within reach. i set the trunk down and shivered, hearing a pack of coyotes yelping up in the scrub, so close i could almost feel 'em. my cell phone rang.

"call your son up, tell him we got chicks and dope, that'll get him up here." alone now, i shrugged off the suggestion and loaded his rugs in next, egyptian, kazakstan, frayed and crumbling. right on top of the psychedelic fillmore posters in broken frames. wrapping a decrepit wooden chair in a blanket, i threw it in. "that's faye dunaway's barstool", jake quipped, as he wolfed down the thick t-bone steak he had just grilled for himself.

ten hours in cary, the young landlord, walked in. "i'm takin' two hundred dollars outta your deposit for the cleaning crew to come in here, and sixty dollars more for your phone bill." "it's clean, and your mom paid the phone bill last week!", jake yelled, standing in the midst of one dissheveled pile. "we're done, we'll be outta here in two minutes." cary walked out.

"hey, where's that five dollar bill and those chocolate bars, look in the garbage will ya'?"

"jake, can i use your bathroom?", i interrupted. "no i can't stand other people using my toilet. no wait go ahead, it's not mine anymo..." his voice trailed off as i walked outside. hawks circled something high up on the mountain.

stepping out into the yard, i saw the town spreading out across the valley below, blue mountains on the horizon punctuating the bright light of the setting sun. i let out a sigh of relief and pissed on the piñon tree as the last rays of light flickered through the branches.
Posted by Randall Garrett at 7:02 PM